Recently I came across a spiritual article on Tolerance that referred to UNESCO's definition: "Tolerance is respect, acceptance and appreciation of the rich diversity of our world's cultures, our forms of expression and ways of being human. It is fostered by knowledge, openness, communication, and freedom of thought, conscience and belief. Tolerance is harmony in difference."

Sometimes it appears difficult to practice some spiritual prescriptions such as above. Such sane characteristics typical of epic-character 'Rama' become impractical especially while dealing with insane 'Kaansaa's kind black behaviors. So I dug into UNESCO's definition further knowing very well that I am too small a fly in front of spiritual Gurus and UNESCO's definition as well that went on to say that, "Tolerance is the responsibility that upholds human rights, pluralism (including cultural pluralism), democracy and the rule of law."

On seeing reference to "the rule of law" in the definition, I was a bit relieved.

How long does one tolerate a given abnormal situation or an abnormal behavior, be it that of self or that of others?

Once, Twice, Thrice? How many times? Everyone faces this dilemma some time or the other.

Epic character Rama in you may tolerate abnormal behaviors limitlessly. However another epic character Krishna 'directed me' to devise my own method to make a judgement.

In any given situation there may be an involvement of man, machine (equipment), material, method (a standard, a process or a procedure to perform act/s) in a typical work environment.

Anything going wrong in any one of these ingredients individually or collectively may create an undesired or a mistakeful outcome that one refers to  as an abnormal situation. It's like an undesired, out-of-tune, out-of-beat, noise instead music getting produced in an orchestra.

The undesired outcome may be due to a collection of mistakes. Role of 'music director' of the situation is to track and trace such mistakes in order to  'orchestrate' prevention of those for producing desired effect in future.

So as a student of Kaizen-school-of-thoughts, in order to prevent making wrong judgement while studying an undesired situation, I identified three categories of mistakes.

An inadvertent mistake is unintentional. It's not done on purpose. It might just  happen as a result of missing consciousness of one's own mistake or that of others. It is like falling in a given pit or a pot-hole on road for the first time. The cause may be inattention while talking on cell phone. Or it may be that  someone else being on wrong side forced the victim on right (correct) side to suffer.

A careless mistake happens due to missing concern or worry about consequences of a mistake. It might occur as a result of not giving sufficient attention or thought, especially concerning it's avoidance or harm therefrom. It is like falling in a pit second time while talking on cell phone. Mostly fools fall in this category.

A criminal mistake is the one that recurs due to recurring carelessness. It's criminal since there is a resistance to learn from past mistakes. It's criminal if it's done intentionally. In most cases, the criminal himself may not fall but surely makes fellow-beings fall and, if not arrested, repeatedly so. In fact, he ends up pushing them and at times pushing community itself into crises.

Inadvertent and careless mistakes are relatively easy to tackle. But criminal mistakes are the most difficult ones to tackle because they are more to do with wrong intentions and criminal mindsets deployed by-design.

1/ Tolerate a mistake one-time while it's Inadvertent. Invest in training and putting Kaizen efforts on errors thus revealed in order to make the process mistake-proof. Establish complimentary SOPs (standard-operating-procedures), rules and regulations to prevent deterioration of the mistake-proof level attained.

2/ May tolerate a mistake second time while it's at Careless-stage. Put in training, Kaizen efforts and complimentary rules & regulations by revisiting the mistakes in order to make the process mistake-proof.

This way the chances are that inadvertent and careless mistakes may get prevented from getting matured into criminal ones especially that concerned with safety, dignity and rightful rights at personal level as also concerned with rightful common goals.

3/ So having given opportunity for structured learning and that of tolerating mistakes once or twice, tolerating it the third-time is being criminal on the part of the tolerates or the orchestrator himself apart from tolerating the so-called criminal making mistake. Because in that case it's the orchestrator who allows a small-mistake to grow into a crime or a crisis or a disaster.

Having established that a mistake falls in criminal-category, it should be dealt with with a sense-of-urgency.

Apart from enforcing rules & regulations used to deal with criminals while 'dealing with criminal mistakes', great leaders deal with 'causes of such intentional behaviors'. Like wrong intentioned poor leaders they don't corner the people making mistakes. That's a separate topic to be dealt with some other time on investing time and efforts in 'behavior-modulation' of the people concerned. 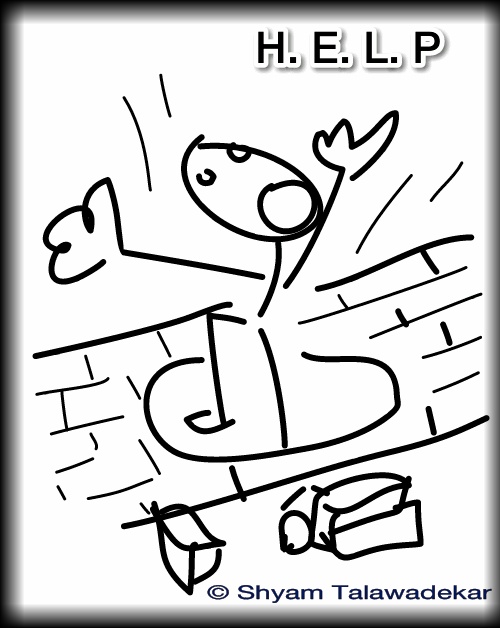 Posted by Shyam Talawadekar at 20:16