On a winter morning he was out to take an admission test. Just before boarding bus to the exam-center, he realized that he had forgotten hall-ticket at home.

He rushed back. The door-lock failed to open as he tried vehemently. Tension began mounting as he consulted his wrist-watch repeatedly.

The lock was behaving the way it wanted to: funnily. His body was trying to cope up by pumping in more adrenaline in reaction.

He consulted neighbors. Called-up parents in office. Both advised him to calm down.

Taking a small break he sat on staircase. With closed eyes he meditated on sound the lift was making. Took a couple of deep breaths. Suddenly something clicked to him. He got up. Kept bag by the side. Inserted key in the lock. Pushed the door slightly up pulled it towards him gently while murmuring "Khul-ja Sim-Sim"!

Voila! The door opened.. He grabbed hall-ticket. Luckily he had (not luckily, he often has by-design) extra time at hand. So rest all went fine.

How does 'dwelling' help?

What had changed between 'non-working' and 'working' status of the lock? Three things changed.

1/ The break that he took offered him a moment to change his tensed mind into relaxed and uncluttered one.
2/ Uncluttered mind offered empty space for fresh thoughts that clicked an idea.
3/ The idea got implemented without tension.

After a couple of iterations the equipment did work. The problem that seemed very difficult, appeared exceedingly simple as it usually does in the end.

One thing was common among three things that changed: The Relaxed mind.

Non-judgmental relaxed mind coolly directed (hands to) focus on actions. It prevented negative reactions. It directed attention on choicely responding to the situation: Positive re-actions or simply put response instead of reactions as the respons-a-ble people give if you may like to call it.

Apart from quality of space and time it offers during the nano-dwelling-moment, there is a deep meaning behind 'mind' being 'relaxed' if one is willing to receive.

Mind gets more powerful to work efficiently and effectively if 'one doesn't allow' it to (overly) 'worry' about symptoms and end-result: be them good or bad. That's a gateway to equanimity! That is what Yog-Gurus advise and practitioners of meditation do.

Scientific explanation to how 'dwelling' helps

To put it in research-language of Behavioral-Modulation-Technique (BMT), peaceful 'dwelling' helps in providing a positive antecedent that encourages active-listening to the-self. As a result, instead of preconceived thoughts, facts of the matter get attention for further analysis and for follow-up action. Peaceful mind prohibits entry of negative emotions (the negative antecedents) that otherwise trigger ego-clashes and harmful consequences therefrom.

To put it in research-language of Dr Eric Bern's Transactional-Analysis (TA): In the later part, his 'relaxed' mind didn't 'worry' about the situation as a problem. It's parent-ego part however did stay 'concerned' about it while considering the situation as a passing-phase. It kept advising him to stay cool having experienced favorable benefits of doing so in past. Thereby his mind was free of 'emotions' of fear not allowing it's child-ego part to waver. It allowed it's 'logical' counterpart, the adult-ego, to take charge. 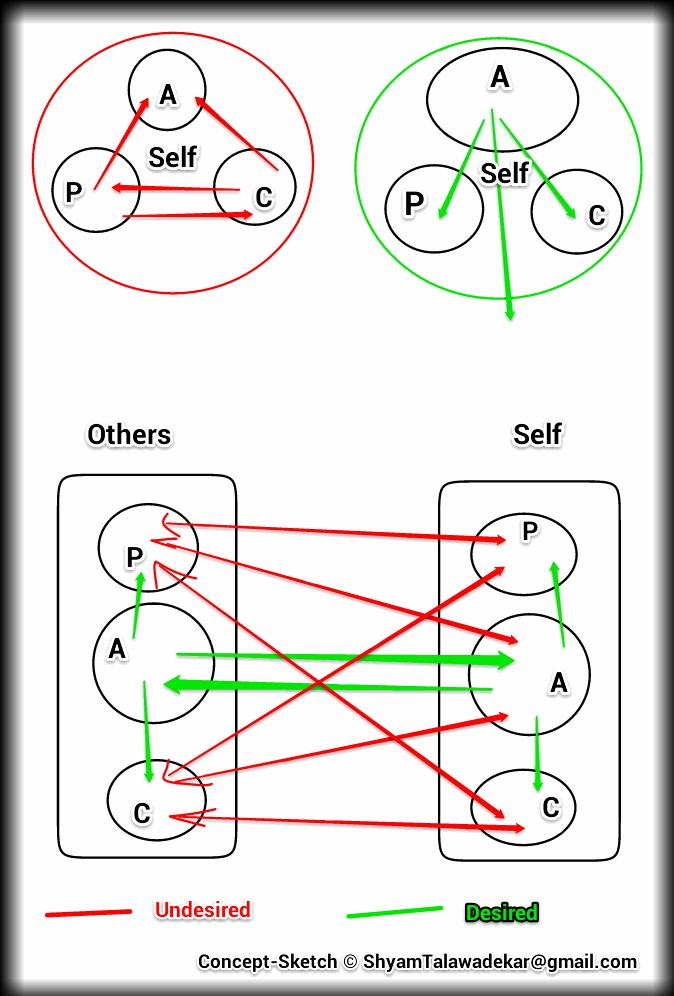 Adult-ego in turn kept both the child-ego and parent-ego in control and took next logical step.

It uncluttered the mind's passage off negative thoughts in order to accommodate flowing-in of more logical information and options in response to inquisitive questions such as 'what-when-where-who-why-how'.

A factual information 'click-occurred' and surfaced out of that, that 'this-is-how' the door behaves sometimes during monsoon. And 'that's-the-way' it needs to be opened then.

While his mind was buried under the emotions of worry and tension, it's child-ego part was ruling and behaving funnily, prohibiting recall of abnormal behavioral patterns of the door.

According to Dr Eric Bern, mind chooses to behave differently in different situations. Sometimes it behaves as a 'parent', sometimes as an 'adult' and sometimes as a 'child'. In his words:


Parent-ego is one's 'Taught' concept of life (revolving around conventions, one's  past conditioning or programming)

Adult-ego is one's 'Thought' concept of life (revolving around logic)

Child-ego is one's 'Felt' concept of life (revolving around emotions)

In the language of BMT, each of the above egos have their pluses and minuses depending upon a given situation. Adult-ego is however supposed to prevent both the 'parent-ego' and 'child-ego' from hijacking a given situation. It also  treats others as 'adults' and 'respects' their opinions. That's what is called as 'respecting people' and behaving with maturity.

What is the learning?

In a given situation it's but natural to have emotions. But it's important not to get emotional by getting carried away under the influence of emotions. Consciously keeping cool by meditative breathing does help here in getting over emotions.

First of all count 1-2-3.. ...10 in order to arrest reaction and stay cool.
Close eyes gently.
Take a couple of de..eeeee-ep breaths.
Focus on 'feeling' the 'cool' breathing-in and 'warm' breathing-out process.

The process de-focusses you from the clutter of undesired thoughts.
Hence you feel better! More composed!!

Here is a beautiful time-slot you have 'hard-earned' for yourself.
Now you can 'dwell-a-while-meaningfully' on the agenda on hand.
Focus on the facts that you see around concerning the situation.
Analyse the facts and process them in order to derive actionables.

That in turn helps one to choose, rather act by design like a parent, adult or a child as appropriate to a given situation. It prevents internal ego clashes and thereby prevents clashes with others i.e. external ego clashes (see in picture the red-colored arrows shooting out).

While stuck in messy situations or while making important decisions, 'parent-in-you' may help keeping your cool. It assists 'adult-in-you' to take charge of both the 'parent-in-you' as well as the 'child-in-you'. 'Adult-in-you' thereby can choose safe-n-sound course of action by striking a balance between emotions and logic.

While in play-ground, 'child-in-you' may take charge and enjoy while letting the 'adult-in-you' to keep both the 'parent' and 'child' in you in control and balanced.

At workplace or otherwise the 'adult' in you 'respects' other people.

In this blog-post I have covered how 'dwelling' helps alongwith it's scientific explanation offered by BMT and TA. I have extended this learning and tips to my blog-posts titled "Success Or Failure: What Do You Like?" in order to understand equanimity and to "In A Big-Problem?: Wear Hats To Solve It !!" in order to see how it helps in solving chronic problems and larger issues. I hope it helps. Looking forward to your experiences. Do write those in comment box hereunder.

Strategise To Achieve Targets Daily
Old-Problems, New-Reasons !
Ant Knocks Elephant Down
Will It Work Here?
Can-changing-thoughts-change-nation?
Ridiculous Poison-culture versus Maverick Kaizen-culture
WOW Work-Culture: By Telling or Selling
IQ-EQ-or-SQ: What-is-more-important
Talent-Is-Latent: Enable It!
Judge If It's Paralysis-By-Analysis
Will It Work Here?
Suggestions On-Sale, None-To-Buy
Does recognition really matter
Who Comes First: Consumer Or Customer ?
Treat Root-causes, Not Symptoms !
Do You Ask Right Questions?
Am I 'Short-sighted' or 'Long-sighted'?

Prevention: The Best Cure! ... Is it really so?
Treat Root-causes, Not Symptoms !
When Safety Becomes Sorry
Drove To Hell ... Almost !
WOW Work-Culture: By Telling or Selling
In a Problem?: No Problem ! Dwell A While !!
Part-1
In-big-problem? Wear-hats-to-solve-it! Part-2
How To Make A Difference
Big-Be Or Bug-Be !
Make checklists your friends
Do You Cleanup-After-Crisis
That's How Morons Work
You seem Reasonable if you appear Un-reasonable
Waste-to-eat-sea-to-drink
Posted by Shyam Talawadekar at 11:44