Sometimes companies tend to forget remedying 'lost sales' in the 'current-market-current-product-current-customer' quadrant in their enthusiastic quest to get 'additional sales numbers' by trying to acquire new customers with new offering in current or new market. 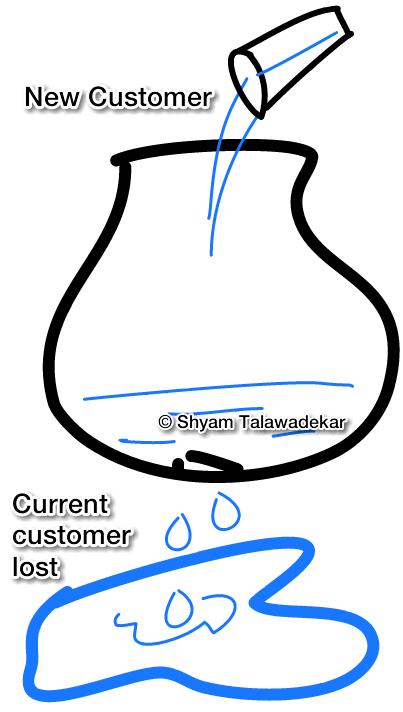 It is like pouring in a pot from top that has a hole in the bottom.

After exercising 'mobile-portability-right' to switch over from company-B, I received not less than 8 calls from them.

Half the calls received were from their marketing officer with an 'attractive' offer to switch over company-A SIM to (his own) company-B. Perhaps he was ignorant that I had surrendered my other (company-B) card due to their unsatisfactory service. Their market-intelligence' seemed to be smart though to have list of the competitor's clients.

Balance half calls were from their customer-care officer to find out why I had 'switched' from company-B. Calls were backed by an apology letter.

So on one hand marketing was busy working on acquiring new customers while customer-care department was making a failed attempt to 'retain' current one. On the other hand operations department seemed to complacently (mis-)handle existing customers inadvertently forcing them to quit.

But retaining a 'current customer' and hence 'current sales' is relatively a far easier and economically more viable strategy that should be perfected by plugging loopholes/deficiencies in services before applying 'Penetration', 'Product/market development', and 'Diversification' strategies.

While the 'current customer' provides cues for loopholes, the later strategies to acquire 'new customer' need at least 10 times more investment (in time, efforts and money) than the former. As a student, I had often felt disgusted when photocopier shop near my college used to keep my 200-pages running-order on hold intermittently in order to service a single-copy customer (jumping the queue).

The former strategy is a play in current known-terrain. A satisfied current customer is more likely to be a brand ambassador providing leads to prospective customers in new terrain (environment).

Doesn't a bird-in-hand need to be cared for before the two in the bush as goes the old saying?
Posted by Shyam Talawadekar at 22:44