Prevention: The Best Cure! ... Is it really so?

A study at the University of Technology Sydney (UTS) provided solid proof. The laboratory trials found cigarette butts ignited the hay in 33% of cases under combination of a certain conditions: wind speed, fuel moisture and the degree of contact between the fuel bed and combustion area of the cigarette. During the survey, 426 cigarette butts were collected in a 60 square meter area.

Now can you say which one of such abandoned butts might contribute to 33% that cause fires?

Can dangerous road conditions cause accident-deaths? 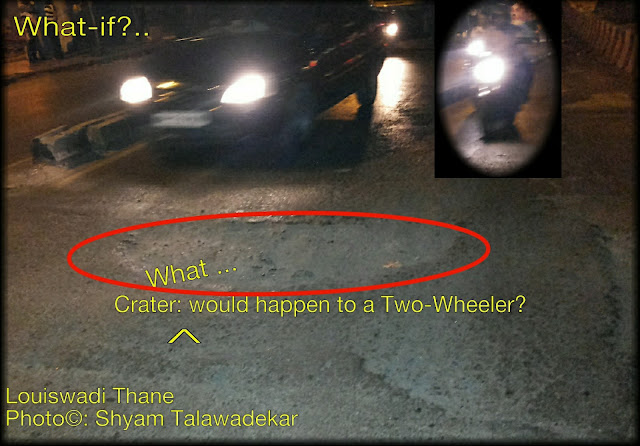 Washington Post (dataflurry.com Jul 22nd 2009) published an estimate that over 22,000 of the 42,000 people that die each year in USA from automobile accidents (i.e. over 50% deaths) occur because of dangerous road conditions such as potholes, fading lane-line-markings, missing road-signs, and debris that gathers on roadways, hazardous highways, narrow roads, etc. Rest deaths are caused by driving under the influence of alcohol, speeding excessively, and even neglecting wearing a seat-belt.

Now can you say which one of those narrow roads or potholes (see picture) is a potential death trap?

Worldwide an estimated 200 to 300 million malaria infections occur each year with 2 to 3 million deaths. A person gets malaria from the bite of an infected female mosquito.

Now can one guard oneself from an infected female mosquito?

In other words, it is difficult to know which one or more of the typical abnormalities in daily life might strike you in the form of a crisis or a disaster and when so. What is most likely is 1-in-every-300-abnormalities of similar nature might strike you sometime if one goes by the '1-30-300 Safety-Maintenance-Pyramid' of Kaizen¹. And when it strikes, it does bring with it corresponding intangible as well as colossal tangible losses or costs called as 'Costs-of-Quality' in Kaizen¹ parlance.

In that case isn't it wiser to take more-care every-time one is confronted with 'signals' of such abnormalities in 'seed' stage?

- It may be a municipality possibly doubly-caring to look for causes of cracks before they turn into cracks that then graduate into moon-ly-craters. Expecting municipality to be prompt for the benefit of tax-paying customer sounds difficult though!
- It may be a driver/rider doubly-caring not to speed-up in order to prevent getting trapped into a crater.

Wise are those who do and those who know 'when' to overlook 'which' of the 300-abnormalities and 'how'?

Overlooking does not mean ignoring the abnormalities. 'How' part is supposed to address the means i.e. to know 'what' care should be taken with 'how much' risk while overlooking the chosen ones. Sometimes decisions are needed to be taken with calculated² risks if facts and figures are available in time. It's like  making decisions by 'wearing a helmet'. Sometimes it's with ³judgmental-helmet particularly in emergencies.

In absence of being wiser, an over-confident fellow must get ready to 'fall again-n-again' like Mr-Foolhardy and keep endlessly hoping to get 'cured' of the resultant crisis under someone else's 'paid-intensive-care': The 'Costs-of-Quality' for self as well as for her customer in case of a business-delivery.


Footnote-1, Kaizen is the continual  improvement philosophy (or science or culture) that provides ways-&-means to manage both the prevention of crises as well as quick relief from crises. The ways-&-means are composed of a judicious balance of both the intrinsic motivation (typical eastern-approach) as well as extrinsic motivation such as carrot-&-stick (typical western-approach) where needed.

Footnote-2, FMEA is a Kaizen-tool that gives a calculated number to the risks called as Risk-Priority-Number (RPN).